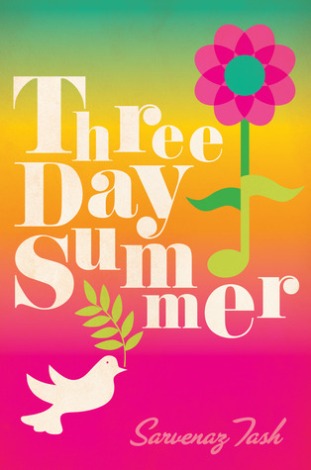 [ARC provided to me in paperback format in exchange for an honest review. Date to be released: May 19, 2015. Imprint: Simon & Schuster Books for Young Readers. Release information: Hardcover, $17.99/$21.99 Canadian.]

It’s 1969 and the biggest concert of all time is about to descend on the small town of Bethel, New York, only nobody knows just how big it’s going to be yet. There have been rumours, which is why Michael just has to go. It’s the only thing he’s sure about. Torn between enrolling in college—which he’s not too thrilled about—and putting his name down for the draft into the Vietnam War when he turns eighteen—which he’s impartial to—Michael is happy to just focus on the music, despite the manipulative girlfriend that he wishes he could break up with tagging along.

Cora wants to be a doctor. It’s her deepest, darkest secret. It’s why she’s volunteering as a candy striper in the medical tents at the concert being set up practically in her backyard. But even she can’t resist the music, and when Michael comes stumbling into her tent, carried by two of his friends and then left there, his love for Jimi Hendrix and knowledge of the music scene is intoxicating. Cora finds herself swept up in Michael’s enthusiasm, but a part of her holds back. It’s the part still hurt by her recent break-up. It’s the part still scarred from the fact that her ex-boyfriend didn’t believe she could be a doctor because she’s a woman.

Cora and Michael discover themselves in the middle of the biggest musical gathering in history and discover each other as well. Three Day Summer will leave readers wishing they had been at Woodstock and feeling the flower power. Music lovers will go crazy over this book about the biggest concert of all time.

I don’t think I’ve ever read anything like Three Day Summer before. It was an incredibly unique and refreshing read, and I thoroughly enjoyed it. It reminded me of the movie Across the Universe, only the YA book version, and I love Across the Universe. I’m sure you can see what I’m getting at.

One of the things I loved most about this book was its emphasis on living in and really experiencing the present, which was ironically delivered through a story that takes place in 1969 at Woodstock. Though the book wasn’t as perfectly swoon-worthy as I had hoped, it did have some steamy moments and the character development was spot-on. It did have a slight slump at the 4/5 mark where I could see where the book was going and I just wanted it to get there. That being said, it made me wish I had been born a few decades earlier so that I could have experience Woodstock.

I hope Tash writes more books that take place in this era because Three Day Summer definitely has me wanting to explore it more. I’d also love to see fans of the book posting pictures of random people at Woodstock that they think could be the characters in the book. (And just a side note: everyone needs to hear Joe Cocker’s version of “Come Together.” It just so happens to be on the Across the Universe soundtrack.)

P.S. I never do this, but for this book, I sticky-tabbed three separate pages that had really awesome quotes. They are mantras to live by, I swear.

Also, fun fact: my mom was a candy striper.

Check out this book on Goodreads!

Purchase this book on Amazon.